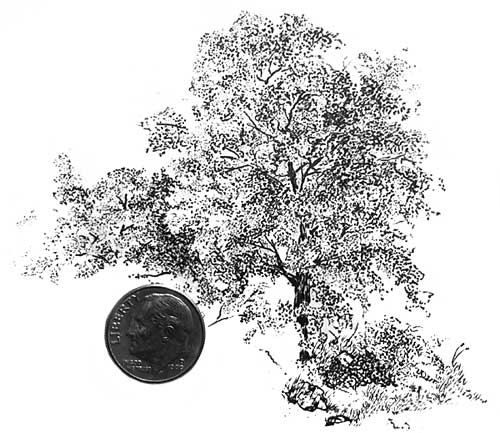 I was recently asked:

I have been drawing portraits for a couple months but am still having a hard time with proportions. I’ve gone through websites, books and watched tons of tutorials, but I’m finding angled faces hard to draw. I always end up distorting them into looking straight ahead and it looks wrong. I was wondering if you have any tips to help me.

I think “looking straight ahead” might give me a clue to the problem. You haven’t yet taught yourself to see what is really there and you are drawing what you think is there. That’s a very common problem and one that you have to work at to overcome.

First, I suggest you try using the grid method to produce an accurate set of guidelines. I’m not suggesting that as a permanent answer but because it’s an excellent way of teaching your brain to stop interfering and to accept that what you see is actually correct. Take a look at my tutorial, which takes gridding a stage further: www.SibleyFineArt.com/tutorial–gridding-art.htm

This is a very involved subject so briefly: your brain is wired to store quickly-recognised features as a part of its defence mechanism. If you see a large face with huge teeth and a woolly mane, you need to recognise it instantly and get out of the way of the lion! All detail is discarded, only salient features are stored, and only those with hard edges, such as eyes and mouth. That’s why children usually omit the nose from drawings of people – it has no hard edges or clearly defined boundaries. Also everything is stored as a “straight on” image – when speed of recognition is paramount, simple is best.

Here’s an illustration from my book (discovered behind wallpaper in our bedroom):

The propeller is round and at the front. The wings are wing-shaped and correctly placed at each side. The pilot is inside the fuselage but can see out above it… it’s all logically correct but each element is seen straight on because that best describes its shape.

Try gridding first, because that removes three-dimensional form, textures, lighting, and detail and it reduces your subject to pure line. And by concentrating on just one square at a time, it divides each feature into unrecognisable shapes – shapes that the brain cannot recognise. Recognised shapes invoke the “I know all about that” response and the naming of parts. “That’s a ‘mouth’ and I know a mouth looks like this…” But that’s a generic stored-image mouth and not THIS mouth. It’s that naming and recognition you have to overcome and when you have, you’ll finally be able to see and draw what you are looking at – and not what you think you can see.