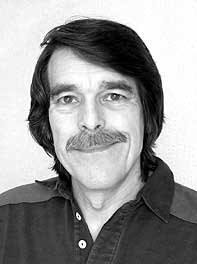 There are many animal artists around and it would not be fair to compare them but in MIKE SIBLEY we have something different.   After leaving Leeds College of Art in 1970 he met his wife Jenny who bred and exhibited horses and dogs. It was this that turned his talents in that direction. A professional artist now for over thirty five years, he often spends over two hundred hours on a single drawing.   Mike's work is special in its fine detail. The only tool for this is the pencil. He doesn't like colour, he says colour gets in the way.

Mike's art sells in many countries including America, Australia and Scandinavia. His first limited edition print, an edition of fifty Irish Water Spaniel prints, sold out at its Crufts release in just three and a half hours. He now rarely accepts private commissions - only when time permits and a four-year wait is not unusual.  The work is stunning, make a point of looking out for his prints and original drawings. You will be impressed.

(Condensed and updated from Our Dogs) 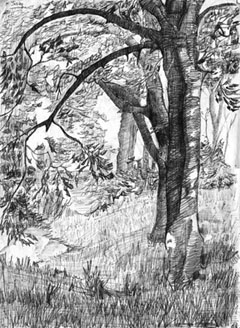 ...up to 1965
I was born in 1948 in the Essex country village of Orsett, England but at the age of five my father's work took us north to the town of Sale in the county of Cheshire. This is the only piece of work remaining from my days at Sale Grammar School and I have always been rather pleased with this ballpoint pen study. The drawing shows the school's copse - a small patch of woodland surrounding a pond - which was behind the school in a corner of the athletics field.

Even in those days I preferred to work in monochrome - studying the underlying essence of an object rather than its superficial colour.


1966
At 18-years old, having graduated from school, I attended Manchester College of Art & Design for my pre-Diploma year. Here we were introduced to a large array of materials and techniques - I learned to gas weld, for example - whilst traditional skills were also encouraged. This hyacinth bulb pencil drawing (16" x 9") is one result of that period.

Manchester Art College gave us a wide footing in the world of art creation. As well as introducing us to new mediums and techniques, the tutors also made certain we experienced the more formal side too, such as regular life drawings sessions.

I was also fascinated by comic images - many resulted in sculptures such as this one. A few larger ones were animated and one had a looped "Wheeeeee" sound effect that was timed to stop just as the dustbin lid rattled and a head then arose from it, wearing the lid as a hat.
1967 to 1970 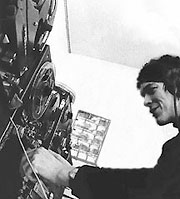 Leeds College of Art & Design - Little work remains of this period. The route I explored began with painting and drawing, quickly moved into sculpture then progressed into electronic music (before the birth of the Moog synthesiser so I had to hand-build all my equipment). I had designed a kinetic sculpture that included a simple electronic sound generator - I built the generator, found that I couldn't afford to build the sculpture, then became fascinated by the "shapes" and "textures" that sound could create. My major project (a controlled environment designed to counter all senses except responses to sound and light) was never constructed due to cost although the extensive plans still exist.

Later, after leaving College, I found many parallels between my drawing techniques and my method of building up electronic music - layer on layer, finally re-applying the "bright" highlights that the process consistently muddied. 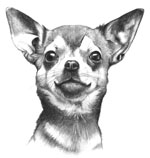 In 1978 my wife Jenny asked if I would draw a motif for her dogs pedigree forms... she never got it but our business had begun. I drew nothing but dogs over the next three weeks - each night I would plan the next day's drawing and each morning I was enthusiastic to begin. Gradually the work improved - this unsigned drawing of a Chihuahua was the first to succeed beyond my expectations.

I tried other media including Scraperboard (Scratchboard), but nothing transferred my thoughts to paper more accurately than pencil.

Commissions soon came from Jenny's friends in the world of dogs and the word gradually spread (I have never advertised) until I had enough commission work to think about taking the business seriously. Until then I had been supporting myself, Jenny and my stepson Steve as a cab driver. An 84-hour, 7-day working week didn't leave a lot of time for art but by working the 2pm to 2am shift I had the late mornings free. By 1980 we owned our own taxi, which I drove at night and rented out afternoons to free more time for drawing. In that year I turned professional and didn't renew my taxi licence.

These were soon followed by the first of the best-selling open-edition range of head-studies. A chance meeting at a show with publisher Berjaya proved mutually successful and saw the prints move up to hold the UK's #1 position. At the height of their popularity Berjaya were printing up to 20,000 prints a year and the range is still one of the most popular worldwide. In one year alone Deck The Walls in the USA purchased 12,000 prints for their extensive chain of stores.

In 1989 I experimentally added a connective scene to a Springer Spaniel head-study. The following year I repeated the experiment with a Border Collie and was filmed working on it at Crufts by BBC Television. These two detailed studies began the Mike Sibley Collection of Limited Edition Prints. 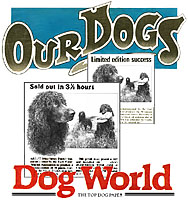 Sell-out...
In 1990 I was commissioned by the Irish Water Spaniel Association to produce a limited edition of 50 prints. The drawing took 117 hours to complete and the prints were launched on the IWSA's breed stand at Crufts at 8:30am........by 12 noon they were sold out!

Very soon copies were changing hands at up ten times the original selling price of £45!

2001...my first website
In 2001 I built my first website - with a copy of "The Idiot's Guide to HTML 4". I was so taken by the flexibility offered by building from scratch and hand-coding that I've followed that route since then. A year later I began to learn Javascript and the building of framed sites. Around that time I offered a single page of my site to other artists, as the "Guest Artists" page. It quickly grew until in 2002 I built my Starving-Artists.net site to split the two apart. Starving Artists now has in excess of 40,000 page hits a week and offers three services: subscription Gold and Silver galleries that form mini-websites for each artist, and the free galleries of Starving Artists 2. I still run Starving Artists personally, although Starving Artists 2 is an automated commercial program that artists can directly post their work to. [Please note: I reluctantly closed Starving Artists in March 2019. It needed a major upgrade to PHP 7.2 for which I lacked the time]

In 2004 I began to design and run commercial websites for other artists and now have a stable of over 20 sites. Sample sites: www.DianeWrightFineArt.com and www.MarieBrownFineArt.com. These websites are based on a central core design that is restyled for each artist to keep the costs low. 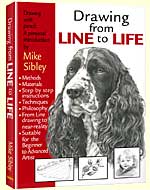 2005...my first book
In January 2005 I sat down to write and illustrate "Drawing From Line to Life". I worked on it full-time and finally completed all 288 pages in October of that year. In the meantime I had researched for a suitable publisher but most had a development time of 18 months - and a possible shelf-life of just 18 months too! So I decided to self-publish. Quacks The Printers in York bent over backwards to help and they afforded me full access - even to sitting in with Andy the printer to oversee the quality. I can't praise them highly enough.

Quacks are the second oldest printers in the world. The Harvard Press is the oldest but Quacks still operate from their original premises, which makes them the world's oldest in my eyes. Their oldest verifiable document (the sermon shown left) was printed in 1703!

"Drawing From Line to Life" was officially released in February 2006, by which time I'd fulfilled pre-publication orders almost totalling the initial print run of 1000 copies. The book is now well into its fourth reprint and, I am greatly honoured to say, it now contains a foreword by the renowned artist David Shepherd.

Read sample page from each chapter

2007...my first workshop
I had so many requests to run workshops since the release of "Drawing from Line to Life" that I couldn't refuse. So I arranged my first workshop for June 2007, held in Sawley Village Hall, about three miles from the Fountains Abbey World Heritage site.

It was a three-day workshop that took the attendees through the basics of negative drawing right through to a complex drawing of my own dog Buster in undergrowth (the illustration shown left is courtesy of Rob Bristow).

As an added bonus over half the attendees were fellow members of my forum at the late ArtPapa.com - now replaced by TheDrawingForum.com run by myself and artist JD Hillberry. [Please note: TDF also needed a major PHP upgrade and was reluctantly closed in March 2019]

I've run workshops almost every year since in the UK and USA, and more recently in Canada too. Now I'm also running UK workshops in my own studio. And teaching online at Drawspace.com, where I run 8-week Beginners, Intermediate, and Advanced courses.
2011...my first Studio workshop... and Videos to come
Somewhere within my busy workshop schedule I determined to set up my own film recording studio to begin the production of instructional videos - and, as I write, I'm now sitting in my new studio! You can read about it and follow its building stages on my blog. I've been working to make the production of Instructional Videos a reality for the past two or three years, and now I can begin! To follow progress of the videos just sign up to the Books/Videos mailing list below.


2017...my first Videos - and many more to come
After a few years of practice and gathering equipment together... I've finally begun work on the Basic Techniques series. As I write (in 2019), #20 has just been released, and #21 is being written. #23 should see the series completed, and then I'll embark on new and more comprehensive videos - covering subjects such as Negative Drawing, Drawing Hair, and Drawing Trees. To check what's already available, point to "HOW TO..." above, visit DrawWithMike.net, or go directly there.

Join my Mailing Lists for news...
Choose any or all:
Books & Videos
Online Courses at Drawspace
Workshops : UK, USA, and Canada
Artwork & Prints
Visit the Gallery of Unpublished Works for a potted history of Mike's non-commercial work
from the early beginnings to the present day.

I've been trying to return to the countryside ever since I left Essex and finally made it in 1991.  My wife Jenny and I now live on a four acre smallholding midway along a farm track, one mile from the village at either end.  Here we are surrounded by our Shetland Ponies, mini-donkeys, dogs, cats, chickens, and our horses, Badger and Tom.

Want to know more about us?  Click the banner to read the